Brighton eco-campaigner Tom Druitt is celebrating after a court case against him was thrown out by a district judge. 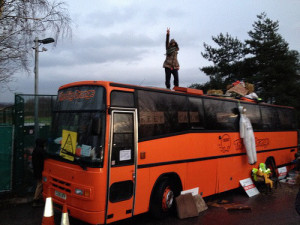 Mr Druitt, the owner of the Big Lemon Bus Company, was charged with obstructing the highway and using, causing or permitting a vehicle to be used in a manner which involves a danger of injury to any other person.

The charges related to the use of the company’s Big Orange bus to prevent an oil rig entering a fracking site Barton Moss near Manchester last December.

Protesters chained themselves to the bus to prevent it being moved away and were forcibly removed by police.

Yesterday morning at Manchester City Magistrates’ Court, the CPS dropped the first charge of obstructing the highway and the presiding district judge ruled that there was no case to answer on the second, as the prosecution could not prove the defects found on the bus were not caused by police or protesters.

After the case, Mr Druitt said: “The trial was a bit of a farce. Even the judge at one point told the prosecution ‘You’re clutching at straws’.”

A spokesman for Manchester Police said: “The case was thrown out by a district judge because the defendant was not using the bus at the time and the defects could have been caused by the demonstrators who locked themselves on to the bus.

You can read more of Mr Druitt’s account of the case on his blog here.

Mr Druitt has been selected to stand as a candidate for the Green Party in Regency Ward in next year’s Brighton and Hove local elections.