Headbangers are gearing up for Brighton’s first heavy rock festival which is being held at the Racecourse tomorrow (Saturday 27 September).

The Breakout Festival includes more than two dozen rock and metal bands, including some local acts, appearing on three stages.

Aspiring musicians were offered slots alongside a host of established acts, with some of the headline bands offering newcomers the chance to join them on the main stage.

The weather forecast looks fine for one of the final festivals of the year with a line-up that includes Skindred, Funeral For A Friend and The Blackout.

Tickets are available at £34.50 with a special group rate of 4 for the price of 3 with tickets for the after-party at the Royal Pavilion Tavern costing £4. 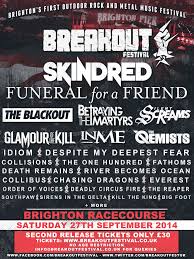 Seven Webster, of Skindred’s management company 7pm Management, said: “As a resident of Brighton it’s great to see a proper rock/metal festival launching to cater for the heavier genres of music as I see it as something that’s often overlooked and it’s time to see Brighton rock again especially with such a great array of talented rock acts coming out of the city at the moment like Royal Blood, The Qemists and Shrine & Collisions.”

Gavin Butler, from The Blackout, said: “We can’t wait to play the Breakout Festival. Brighton is always a great show!”

The Breakout Festival has been put together by two Brighton and Hove students Becky Weatherley and Stefan Curzon-Price.