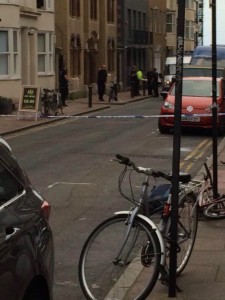 Two men were slashed after a man entered a squat in Middle Street this afternoon.

The road has been cordoned off while paramedics treated the two victims who were attacked in the squat next to Sticky Mike’s Frog Bar.

Detective Sergeant Graham Lewendon said this evening: ” I would ask for the public to have patience while we deal with what has happened.

“It appears that two people have suffered slash type wounds shortly after 5pm. A man entered the squat. The victims are being treated by paramedics but do not appear to have life threatening injuries.

“Two men have been arrested on suspicion of assault but we are still speaking to witnesses to confirm exactly what happened.

There were reports on Twitter that a man was seen in the middle of the road covered in blood and a woman was accusing someone of stabbing her best friend.