A goose was injured today after being attacked by a dog in Queen’s Park. 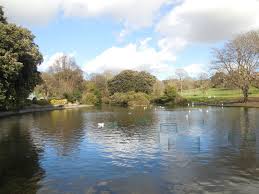 The goose, which survived the attack, was taken to a vet for treatment after being set upon by the dog at about 11am this morning.

A police spokesman said: “We were contacted shortly after 11am today after a dog attacked a goose in Queen’s Park.

“The goose was taken to a vet for treatment. It did not die. The incident is being dealt with by Brighton and Hove City Council.”

A spokeswoman for Brighton and Hove Council said: “The park ranger was made aware of an incident this morning in Queen’s Park. It was reported that one goose was injured by a dog and the bird required treatment from a vet.

“The police are liaising with the dog owner.”

The geese in Queen’s Park live in an area of the park which is out of bounds to dogs, roosting on an island in the middle of the pond.

Brighton and Hove News understands the dog, a large Alsation cross type dog, had jumped the fence while chasing a squirrel and bounded into the water out of reach of its owner.

It made its way to the island and at some point it attacked the goose and the owner waited for police to arrive.