A man has been sent to prison for three years for attacking a man in a row over parking in Brighton. 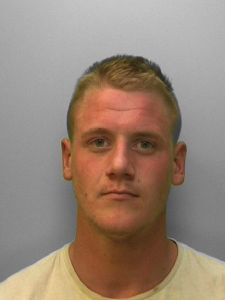 Robert Downs, 23, unemployed from Baranscraig Avenue in Brighton pleaded guilty to GBH with intent and was sentenced on October 23 at Lewes Crown Court.

Shortly after 6.30pm on Thursday May 15 the victim, a 53-year-old from Brighton, confronted Downs whose car was parked on the grass in Preston Park.

As the victim walked away, Downs hit him over the head with a bottle and after he had fallen to the ground, stamped on his head.

DC James Botting, who worked on the investigation, said: “Downs viciously attacked the victim leaving him with severe cuts and bruises to his head and face.

“There were a number of witnesses in the park at the time and his behaviour was completely unacceptable.

“I would like to thank all the witnesses who came forward and their contribution helped in securing this conviction.”