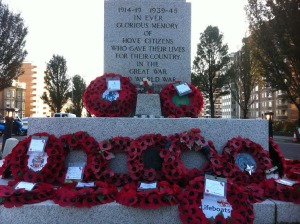 Thousands of people turned out across Brighton and Hove to remember those who lost their lives in wartime.

The main services of remembrance were held at the Old Steine war memorial in Brighton, and in Grand Avenue, Hove, complete with parades of veterans and cadets and wreath-laying ceremonies.

There were also commemorations in Portslade, Rottingdean and at Hove cemetery.

A silence was observed at the Royal Sussex Regiment Memorial in Regency Square, Brighton, and a service was held at the Brighton and Hove Reform Synagogue in Palmeira Avenue, Hove.

This is the 100th anniversary of the start of the First World War in 1914.

On Armistice Day – Tuesday 11 November – at 11am the Mayor of Brighton and Hove Councillor Brian Fitch will mark the two minutes’ silence at the Hove war memorial.