Sixth formers were encouraged to register to vote by Graham Cox, the Conservative parliamentary candidate for Hove next May.

He told Hove Park School students that they should respond to the Bite the Ballot campaign for young people.

By registering to vote from the age of 16, he said, they could make their voices heard.

During a visit to the school Councillor Cox, a member of Brighton and Hove City Council, looked at the Bite the Ballot campaign to drive the biggest turnout of young voters in the 2015 general election. 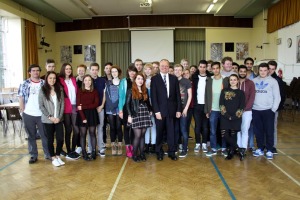 He also gave students the chance to take part in lively debates about issues that mattered to them.

He said: “Debating with the students at Hove Park was challenging and very enjoyable.

“One of the issues we discussed was the need for many more young people to register to vote so their voices are heard through the ballot box.”

Young people can register to vote at the age of 16 or over but cannot vote until they turn 18.

To ensure more young people have the opportunity to vote, the Bite the Ballot campaign will be running a National Voter Registration Day in February. It will target 16 to 24 year olds.

Law and politics teacher John Gaston said: “It was a fantastic session that focused students on how a range of political issues affect their lives.

“And it was really impressive that they tackled the debates in such a lively and intelligent way.

“The key message of the session was that many young people fail to vote and therefore their needs and interests get ignored or are given low priority because politicians are not fighting for their votes.”