Tesco has again abandoned plans to open a store in Brighton’s Lewes Road, years after guerilla gardeners scuppered its original plans for a store there. 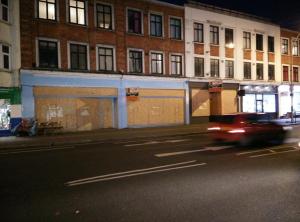 The old furniture store near the corner of Elm Grove, for which Tesco secured an alcohol licence last year, now has a For Sale sign displayed on its shopfront.

A spokesman for Tesco said: “That site was one we had looked at but it’s not something we are looking to take forward.

“It was very early days and we decided the site was not for us.”

He said he was not aware of any current plans to open Tesco stores in Brighton.

The furniture plans met with stiff opposition from residents, who had seen off a previous attempt to open a store at another site on the road by creating a community garden there in 2010.

However the garden was eventually cleared and built on and Morrisons eventually opened a local store there.