The Israel midfielder Beram Kayal turned out to be Brighton and Hove Albion’s final signing in the January transfer window.

The 26-year-old joined from Celtic on a two-and-a-half-year deal for an undisclosed fee after securing a work permit late last week. 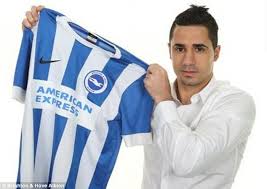 The club made two other two signings. Greg Halford extended his loan from Nottingham Forest until the end of the season. And Leon Best was signed on loan from Blackburn Rovers.

The only departure was Adrian Colunga who has gone on loan to the Spanish club Granada, who are currently struggling in La Liga.

Before the transfer window opened Elliott Bennett returned to Norwich City at the end of his loan deal.

And Darren Bent and Gary Gardner went back to Aston Villa after their loan contracts expired.

Albion take on Nottingham Forest at the Amex on Saturday (7 February) with former Crystal Palace manager Dougie Freedman in charge of the visitors after the sacking of Stuart Pearce.