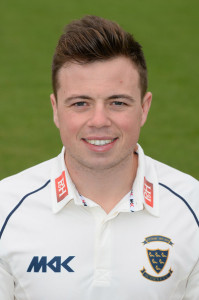 Machan, who qualifies for Scotland because of his mother, earlier bowled just two of the fifty overs, conceding eleven runs as England racked up a total of 303 for eight wickets.

The former Brighton College pupil has been with Sussex since 2010. He went into the match under less pressure than the England coach Peter Moores who used to coach Sussex, having kept wicket for the county for many years.

England needed victory in Christchurch to keep alive their hopes of booking a place in the quarter finals of the tournament, having been trounced by Australian and New Zealand in their opening group games. They won by 119 runs.