The Archbishop of Canterbury brought a message of hope to a congregation of almost a thousand at St Peter’s Church in the heart of Brighton this morning (Sunday 8 March).

Before the doors opened at 10am the queue stretched to The Level as if for the sales. A coffee stall just outside won’t have hurt much-needed church funds – a huge restoration project is under way.

The church was full ten minutes before the service started at 10.30am with many having to stand and people still queuing outside unable to be squeezed in. 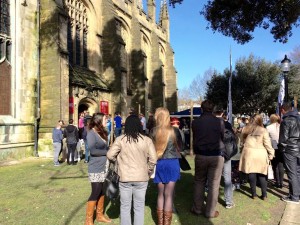 Even with a holy primate, those on the door were unwilling to breach down to earth rules such as fire regulations.

The atmosphere inside was more like a rock concert with a band on stage, lyrics on the screens and applause for the songs. The opening prayers were spoken over the fade-out.

Scripture may say “where two or three are gathered in my name, I am among them” but those running St Peter’s will have been heartened by the crowd.

Brighton may sometimes be called a godless city but, as one worshipper said, St Peter’s is testimony to a spiritual hunger in many of those who live here.

It was hard to believe that six years ago St Peter’s was regarded as redundant by the Church of England and earmarked for closure. Services struggled to attract even a couple of dozen worshippers but a few stalwarts campaigned to keep it open.

Archie Coates and his wife Sam

The current vicar, Archie Coates, took over in November 2009. He led a “church plant” from Holy Trinity Brompton in London to try to bring about a revival.

He has succeeded. Part of the outside is currently cloaked in scaffolding during the overdue physical refurbishment.

Inside the service was led from a stage also notable for scaffold-like structures although these were for lighting and sound equipment.

From where Mr Coates stood and, for part of the service, sat on the stage a digital clock was visible to help those speaking, praying and preaching to keep to time.

Mr Coates welcomed the Archbishop of Canterbury Justin Welby to the stage to whoops and applause from the congregation.

He interviewed him before the sermon, asking how he did an impossible job with a crammed diary and relentless pressure.

The archbishop said: “How do you do an impossible job? I come to Brighton to relax.

“There are only 24 hours in a day. How do I deal with it? It depends who you talk to. Badly, quite often. But with grace. The moment you think you can do it yourself you’re sunk.” 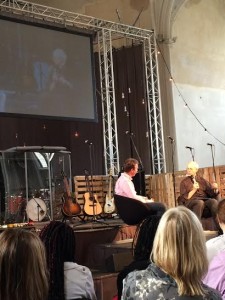 He was asked, how do you pray? “Be a spiritual magpie, which is what I am,” he said.

And, with 80 million Anglicans with many different traditions and views, what makes a good leader?

He said: “It’s changing very dramatically, the nature of leadership.”

He quoted an American colleague, saying: “The age of the hero leader is passing.”

The trouble is, the archbishop said, is that “we all have feet of clay”.

He said it was good to “have the confidence to have around you people who are brighter, more spiritual, taller – in my case not difficult!”

And people who are not afraid to challenge you, he said, adding share the credit and take the blame.

The archbishop said: “I just had my performance review. Can you believe that!”

Mr Coates asked: “Who does that? God?”

The archbishop said that it wasn’t a clergyman but someone really senior.

Returning to the question of leadership, he summed up: “Appoint people around you who are better than you are. Bring people along with you and help them develop past you. 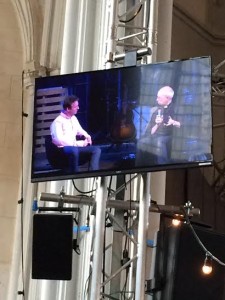 When asked what he thought about the state of society, he said that it was the sort of question that could land him in trouble – again!

He prefaced his reply by saying that it was not party political and said: “I’m unbelievably hopeful.

“The state of society … It’s full of sinners, including everyone in this church, including me. So things will always go wrong.”

But he reminded them of his faith and spoke about how Christian values underpinned the welfare state.

He was asked “what we should be doing here at St Peter’s”. He replied by saying that he and his wife Caroline were visiting every Anglican province.

She was living in an area of conflict or persecution, she was poor and she would know about war, conflict and personal violence from first-hand experience.

He said: “We speak over 2,000 languages in the Anglican communion. (And) we argue a lot. We argue incredibly loudly, very openly.”

He said that Anglicans were Christians and were incredibly diverse but were united in one thing, adding: “We say Jesus is Lord.”

This unity is a miracle, he said. “We can disagree a lot and still love each other very much.” 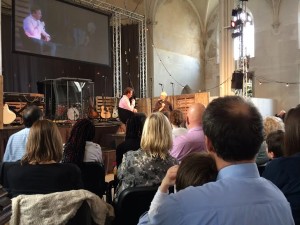 The archbishop then preached a sermon after the lectionary reading – John 2: 13-25 – which told the story of Jesus driving the money lenders out of the temple.

Before his sermon he led a short prayer asking God to “open our hearts and minds”.

And he teased Mr Coates over the informality at St Peter’s, about the lectionary reading – being used in thousands of churches across the world on the same day – and his lack of a clerical shirt.

In his sermon the archbishop spoke about the common phrase “terms and conditions apply” which so often contain a get-out for suppliers.

He said that people could come to know Jesus without a raft of terms and conditions.

When Jesus cleared the temple, he was tackling terms and conditions head on, saying that the temple was there to help humans become what they should be.

And, he said, “the glory of God is a living human being.”

He said: “When I was close to becoming a Christian in 1975 I ran away as far from God as I could.

“I thought being a Christian would be grey, boring and sad and that if I became a Christian, I would have to give up all the things I enjoyed doing.” 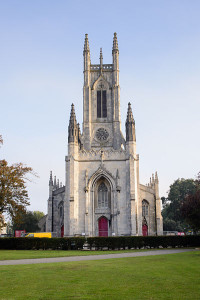 But, he said, to be a Christian was not about ruining your life. It was not about losing the multicolour and being grey. It was about accepting the best life that could possibly be.

He raised a laugh by adding: “Jesus has nothing against souvenir shops in cathedrals.”

And, he said, “cathedrals are fun things. I used to be responsible for one.”

He said that his old cathedral, Liverpool, was the fifth biggest in the world. “They cost a lot of money to look after,” he said.

“I used to get letters saying we should get the money lenders out of the cathedral. I’d write back and say, how are we going to pay for the cathedral? And I’d get a letter back saying, trust in God!”

He also spoke about failure and forgiveness. He said: “I’ve met one person in my life who said, I don’t need forgiveness for anything … that’s a tad optimistic!”

He said: “We have a lot of sin in here. We do not have to feel guilty before God.”

The archbishop said that we all had a deep-seated sense of failure, adding: “We don’t always live up to our own standards, let alone God’s.”

It was known as impostor syndrome, he said, adding: “It just seems so ridiculous to be the Archbishop of Canterbury.”

He spoke about walking down a corridor at Lambeth Palace – “think Hogwarts,” he said – lined with portraits of his dead predecessors and some living ones.

And he added: “I was at a food bank last year and someone came in who couldn’t look up because he was so ashamed because he needed help.

“People here who work in food banks will know that feeling of failure in people, often unjustified.

“He said he came in for a box of food and he went out with a box of love.

“We are the greatest family in human history and you’re part of it.”

His sermon, which lasted between 25 and 30 minutes, was met with applause.

He then welcomed the new Archdeacon of Brighton and Lewes Martin Lloyd Williams to the stage, saying that he had arrived last week, and asking him: “This is your first gig?”

He invited people to come forward to learn more about being a Christian, adding: “There may even be some here thinking about coming forward for ordination.

“Don’t be discouraged. I was turned down first time. The bishop said there’s no future for you in the Church of England.”

And to more laughter, he added: “He may well be right.”

He may have briefly spoken dismissively of fame during his sermon, but the Archbishop of Canterbury left more than a few people feeling star-struck even while just doing his job.