Albion fan, 73, thanks Amex medics who saved his life

A Brighton and Hove Albion fan whose life was saved when he had a heart attack at the Amex has thanked the team responsible. 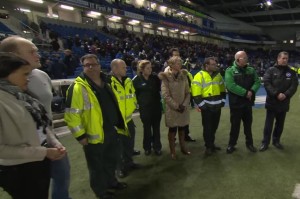 But thanks to staff from the Albion, St John Ambulance and South East Coast Ambulance Service, and medics at the A&E and cardiology department at the Royal Sussex Hospital, his life was saved.

Mr Budgen first alerted St John Ambulance personnel and his last memory was being told to lay down in the concourse, before being given life-saving treatment, using a defibrillator donated to the club by the Sussex Heart Charity.

Derek was then rushed to the Royal Sussex County Hospital by ambulance, and underwent further successful surgery, before being discharged three days later – and the swift and decisive action of all involved means he will be able to make a full recovery from the ordeal.

Derek said: “If I wasn’t at the Amex when it happened, I wouldn’t be here now – it’s as simple as that.

“Thanks to Dr Rob Galloway, St John Ambulance, SECAMB, club staff, those at the Royal Sussex, and of course the defibrillators that are at the stadium, I was in the best possible hands to get my heart going again and I am eternally grateful to everyone for saving my life.”

“The defibrillator got his heart started again but it kept stopping, so we administered amiodarone which stabilised his heart as it was so damaged after the cardiac arrest.

“We then used our advanced defibrillator to shock his heart back to life. The patient needed five to seven shocks to get it started again and he received 15-20 minutes of CPR.

“He was transferred to hospital to receive a stent in his main artery which was 100 per cent blocked. It is very surprising that a patient with such extensive damage to his heart could not only have survived the cardiac arrest, but has had such a good outcome and quality of life.”

Trevor Moss, St John Ambulance district manager, commented: “Well done to all who were involved in this incident, which shows how professional our first aid teams are in these situations. They worked quickly and calmly and we’re all delighted to hear Derek is on the road to recovery”

The club is very pleased to report that Derek is now recovering well from the arrest and plans to be back at the Amex very soon.

Since the stadium opened in 2011 there have been three near-fatal cardiac arrests, but thanks to the quick action of those involved, and the staff at the Royal Sussex cardiology ward, there has been a 100 per cent success rate in saving lives.