The new owner of the Horse and Groom says he would like to turn the locally listed pub into a cafe or restaurant.

The pub closed in January, and a campaign was launched to get it designated as an asset of community value, which would hold up any sale to allow the public to bid for it. 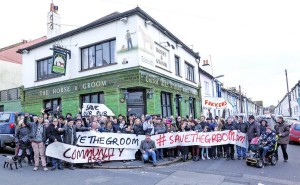 But before this could be decided, property developer Craig Dwyer-Smith bought it, and has now applied for permission from Brighton and Hove City Council to rip out the inside of the Horse and Groom in Islingword Road and convert the first floor into a four-bedroom flat.

And while he hasn’t yet made a firm decision on what could go on the ground floor, he says he would love to see it open as a family-friendly cafe.

Mr Dwyer-Smith said: It’s all a bit vague and we don’t really know what we’re going to do with it.

“Our options are offices or a restaurant, which I think would be really nice in that area – it would make a great deli and cafe.

“It can’t be a pub though, that’s impossible. It just doesn’t work – it closed down because it wasn’t making enough money

“Enterprise told me they were losing thousands of pounds a year – people don’t really drink in pubs anymore.”

The idea has already sparked interest from another cafe in the same street. Andy Walker, the owner of Fanny’s just down the hill, said that he would love to be able to move in and continue the pub’s legacy of serving the community.

He said: “I would love to take it up and make Fanny’s bigger and better.

We’re quite community based and I feel that if the Horse and Groom’s premises licence covered a new cafe, we could do what we do on a bigger scale.

“Where people have lost out with the pub, we could carry on as a cafe where you can have a glass of wine with your sandwich, so people don’t lose out on everything they had before.”