A shoe shop and a health store are set to open at Churchill Square Shopping Centre in Brighton this week. 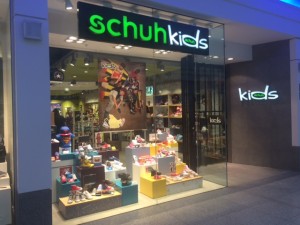 Schuh kids will open its doors tomorrow, and Holland & Barrett will be opening a new “concept” store on March 31.

The schuh kids store will be next to their existing ground floor adult shop, where phones4U was before it went into administration, and employ about 20 people.

It will sell mini versions of the most popular adult styles such as adidas, UGG Australia and Nike to name but a few, plus ranges from Lelli Kelly and Minne Tonka.

The range is split into three departments of cribs, toddler and youth with prices ranging from £20 to £130.

David Spencer, schuh’s buying and marketing director, said: “We are very excited to be taking the schuh concept to the kids market.

The Holland and Barrett store, in the ground floor unit formerly occupied by Menkind and before that Lipsy, will include a “Shake-A-Whey” unit, a mix-and-go bar for sports enthusiasts to purchase single protein shakes to takeaway, or top up a bottle they carry with them, while a pick ‘n’ mix stall of fruit, nuts, seeds and snacks is aimed towards health conscious shoppers.

In addition, a ScentStation will stock a selection of 72 differently fragranced ScentChips which can be added to the top of a clay burner and heated with a small tea light candle to release scents.

The new store will also showcase the extended ethical beauty offering, which includes all natural skincare, make-up and aromatherapy products, which are free of chemical additives including parabens and sodium laurel sulphate (SLS).

Holland & Barrett’s group brand manager Emma Hobbs said: “We are really excited to unveil our new concept store in Brighton, which will be our second in the city, and our customers will be interested to see how it differs from the other one.

“We look forward to welcoming the people of Brighton.”

Kaye Walker, marketing director for Churchill Square said: “The arrival of new stores Holland and Barrett and schuh kids at Churchill Square further cements the broad retail offering we have here and we very much look forward to welcoming them to the centre.”