Restoration work on The Level in Brighton has won a national award. 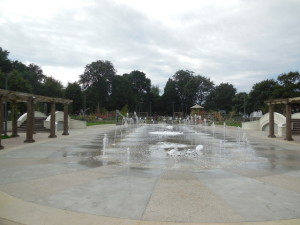 The Level fountains. Picture from www.geograph.org.uk

Work on The Level was completed in 2013, transforming the city centre park with a package of improvements including a new children’s playground, fountains, extensive new planting and hard landscaping, a sensory garden, new lighting and seating.

Historic features from the 1920s were also restored, including the park’s pavilions which are now available for use as community rooms and exhibition spaces.

Gavin Jones Ltd carried out the work at The Level on behalf of Brighton and Hove City Council.

The British Association of Landscape Industries (BALI) awards are presented for landscaping work in parks, gardens and open spaces, the award was made to Gavin Jones for hard landscaping work on The Level. Other BALI award winners included the Queen Elizabeth Olympic Park in London.