Staff from a Brighton law firm took part in a litter pick on the beach and raised cash for charity at the same time.

The Mayo Wynne Baxter staff wore emerald green t-shirts in support of the Macmillan Cancer Support charity and collected £200 from the public. 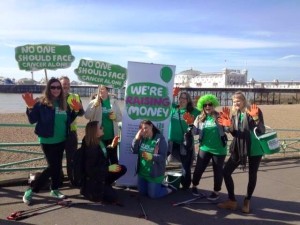 They collected the money as they spent a day collecting rubbish from beaches in Brighton and Eastbourne, including a pair of pants and a seagull’s skull.

Mayo Wynne Baxter, which has an office in Dyke Road, Brighton, gives every member of staff a day off each year specifically for volunteering.

And the firm has a charity group called Macmillan Mascots made up of people who try to come up with innovative ways to raise as much money for charity as possible. They aim to arrange at least one activity a month.

The firm’s PR manager Liza Laws chairs the Macmillan Mascots. She said: “We are really lucky to be able to use a working day to volunteer.

“Macmillan kindly supplied us with ponchos but thankfully the weather was glorious and all of us enjoyed getting some sunny, fresh air while we picked up litter – although it has to be said that the beach was pretty clean.

“However, we did our bit and hope that it’s now immaculate.”