A Brighton landlord has hit back at an MP’s claims its housing block is not fit to house vulnerable people. 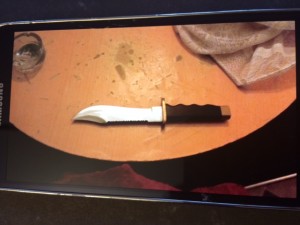 A knife found at Windsor Court

But Baron Homes Director Nazila Blencowe says there are “numerous and frequent complaints” about antisocial behaviour from residents, and earlier this year, a maintenance man was stabbed in the neck with a syringe.

And she said despite this the company has a good relationship with the vast majority of its tenants, some of whom other private landlords refuse to house.

She said: “A large number of the people requiring temporary accommodation can be those suffering from challenging illnesses and drug and alcohol dependency. It is of paramount importance to us that vulnerable residents feel safe and comfortable.”

“There are numerous and frequent complaints from our tenants about antisocial behaviour from others within Windsor Court. The council does not provide any assistance at all in this respect nor does it compensate when damage is caused.

“Other private landlords often refuse to house these individuals, which contributes to the pressing housing shortage that this city and indeed region, faces.

“It is a unique, difficult and complex management service that Baron Homes provides and we have the proven expertise in doing so.

“We note with some interest that Dr Lucas makes no mention of the incident in which one of the tenants attacked one of our maintenance team and stabbed him in the neck with a syringe. That employee is still signed off work on sick leave. 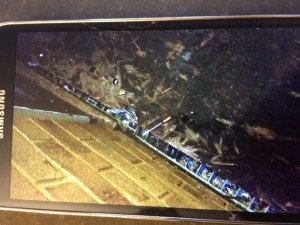 “When we let units, we clean and clear them ready to use. More often than not, when the units are vacated, they are left in a dreadful state. We have photographic evidence but frankly, such photographs are too graphic to publish.

“Quite simply, we do not have to offer temporary accommodation but we take pride in the fact that we are providing accommodation to those who, for whatever reason, have been marginalized. Without us, the housing crisis in Brighton & Hove would be worse.

“It comes as no surprise that politicians are making the city’s homeless crisis an election issue but we fail to see that any solutions are actually being offered.

“We are committed to long-term housing solutions and making a positive contribution to the community. We envisage a scheme to provide adequate resources to satisfy the growing demand but to also create an environment of well-being and discipline.

“This includes co-ordinating with social workers and on hand support to encourage transient groups to move forward with self-help programmes and training initiatives to enable their work and home aspirations to be satisfied.”

A police spokesman said the force was still investigating the syringe attack, which happened  just after 2pm on Tuesday, January 13.
He said: “The 40-year-old victim was also kicked in the back and pushed down a small flight of stairs.
“His attackers have not been identified, but the first was described as a mixed race man with a chubby face and shirt black hair. He was wearing a black hooded top, grey jogging bottoms and white trainers.
“The second man was white with short brown hair and wearing blue jeans and a blue T-shirt.
“Anyone with information about the assault is asked to email 101@sussex.pnn.police.uk or call 101 quoting serial 790 of 13/01. Alternatively, you can contact the independent charity Crimestoppers anonymously on 0800 555 111.”