Travellers set up camp on seafront just days before marathon

Travellers have arrived at Black Rock this week, just days before the Brighton Marathon is due to take place. 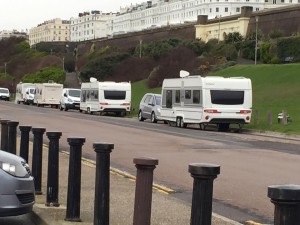 The travellers at Black Rock this morning

A handful of caravans arrived yesterday evening at about 6.45pm, and police and council officers made a site visit this morning.

A spokesman for the marathon said organisers were confident they would be moved on before next Sunday’s event, which finishes along Madeira Drive.

He said: “The police and the council are aware of what’s going on and have liaised with the marathon.

“The council has special powers to deal with occupations like this as our event has a special status.

“At the moment, the feeling is that they will be gone by the weekend.”

A Sussex Police spokeswoman said: “Police were called at 6.50pm on Wednesday (1 April) to reports travellers moving on to Madeira Drive, Brighton.

“Officers are currently visiting the site to assess the situation.”