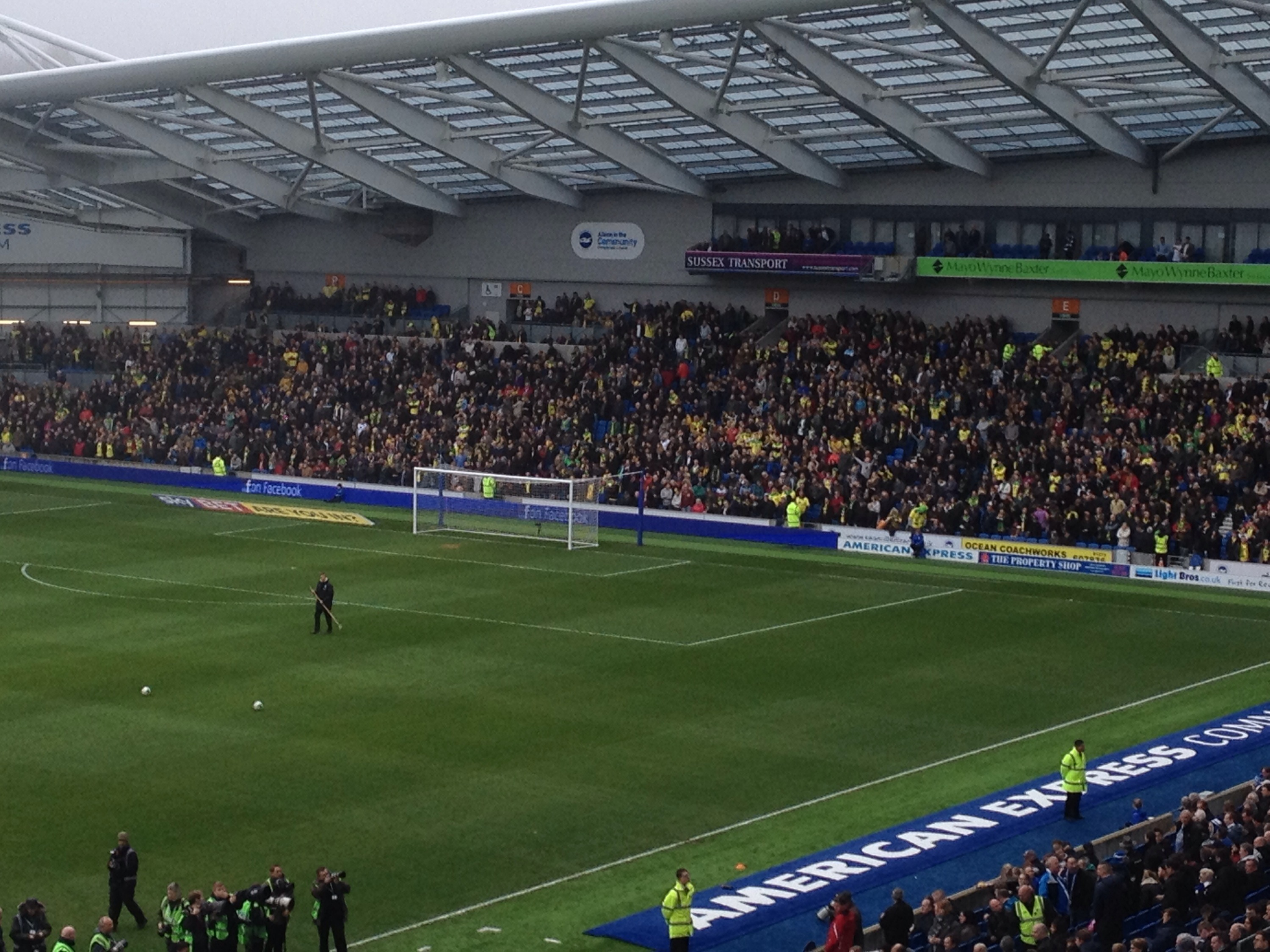 Norwich’s impressive 3,000-plus away fans

Albion lost to a 62nd minute goal from Bradley Johnson who played for the Seagulls in 2008 on loan from Leeds.

Norwich appeared to have a game plan and attacked Albion from the kick-off. The Canaries’ lively midfielder Wes Hoolahan initially caused some problems for Albion defenders Bruno Salter and Gordon Greer.

But it was big front man Cameron Jerome who was the Canaries’ biggest threat early on. The former Stoke City striker forced Albion keeper David Stockdale into a smart save from a 25-yard drive. And before that, Stockdale beat away a Johnson free-kick.

Albion had a three-pronged central midfield consisting of Beram Kayal, Rohan Ince and Dale Stephens. In the earlier exchanges this combination appeared to struggle to cope with Jerome and the industry of Alex Tettey.

Bruno, although seeing plenty of the ball, appeared hesitant at times to cross for the front men unless he was almost on the by-line.

A mix-up between Stockdale, Ince and Greer saw the Albion captain have to hoof the ball clear, after he and Ince played a short one-two on the edge of Albion’s box.

Hoolahan then broke free on the left but saw his shot saved by Stockdale from a tight angle.

The best chance of the half fell to Jerome, who just failed to connect to a Hoolahan cross as the ball skidded across the six-yard box.

Before half time Kayal latched on to a weak back pass by Sebastien Bassong but Albion’s perhaps travel-worn Israeli international appeared to get the ball stick under his feet and eventually laid it off to Teixeira who shot wide.

Albion finished the half on top with Bruno getting clear of Martin Olsson a couple of times but Teixeira and O’Grady failed to capitalise on this. Teixeira then weaved through the Canaries defence but saw Ruddy fingertip his shot away.

It was the introduction of Nathan Redmond on 56 minutes that tipped the balance in Norwich’s favour. The winger immediately caused problems for Joe Bennett and, five minutes after coming on for Hoolahan, he sped past Inigo Calderon and Bennett, then whipped in a cross which was met by Johnson who fired the ball high into the net.

Albion took time to find a response and looked to be denied a clear penalty when Bassong appeared to have kicked Teixeira’s standing foot away.

The Seagulls brought on Leon Best and Craig Mackail-Smith in a double substitution for Kayal and O’Grady with 15 minutes left, Before this Kazenga LuaLua replaced Calderon.

But in truth the Seagulls were shot shy. LuaLua, the impressive Ince and Bruno all had clear chances to shoot but failed to do so. Best also failed to pull the trigger when well placed.

Albion stay 16th, nine points clear of the relgation zone, with double that tally left to play for. Avoiding defeat at Rotherham on Monday (6 April) should ease their fears further although they still have three of the top five teams to play and a trip to Wigan to overcome.

After the match former Albion defender Guy Butters told Brighton and Hove News that both teams would have probably been happy with a draw. Albion were a little unlucky with the goal as he thought that Johnson’s shot, which hit the roof of the net, could have gone anywhere .