A community activist has tied litter pickers on lamp posts along First Avenue in Hove to encourage people to clean up the area. 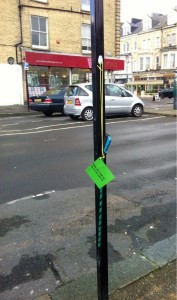 The First Avenue litter pickers. Picture by @BrightonBrummie on Twitter

Andy Ryder, who is standing as a Conservative councillor for Brunswick and Adelaide in the upcoming elections, placed them there on Saturday to empower people to tidy up their neighbourhood.

And he says the avenue is already looking cleaner – although he says new streetcleaner Simon should probably take most of the credit for this.

He said: “I was inspired by Keep Britain Tidy’s Big Clean Up and the sheer amount of people following it on Twitter and doing it.

“Some people would like to do it but don’t know where to start and I wondered if pickers might help.

“My partner bought them online for a couple of quid on eBay – we probably spent more on the sticky hooks and laminated signs.

“I’ve not seen anyone use them yet, but I noticed today that one had been used because it was put back differently.

“The street’s certainly much cleaner, but Simon our street cleaner is quite new to the job and he’s quite keen, so I can’t really claim credit for that. 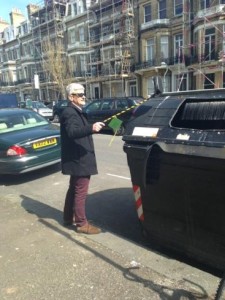 Andy Ryder using one of the pickers today

“At times the street’s been like a war zone because the bins get over full, and people leave their rubbish by the side, the seagulls shred it and the wind blows away.

“I like the communal bins but the problem is they get full then people just leave their rubbish next to it.”

The litter pickers are part of a wider community project Mr Ryder has started, which includes a new website linking to existing resident groups and new Facebook groups he’s started for individual streets in the area.

He said: “It’s something I’ve got involved with because I’m standing for the council this year, but I don’t want it to be anything political. I just want people to be nicer to each other.

“The idea is to start it up then let residents get on with improving their area.”