The derailed train at Brighton Station which has caused almost 24 hours’ worth of delays has finally been removed. 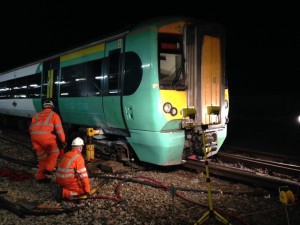 An investigation is still ongoing, although a Southern Rail spokesman said it appears the cause was driver error.

Network Rail has now handed back the line to train operators so services can begin to get back to normal, which is expected to take until 3pm.

However, a person struck by a train at Battersea Park means all services to London Victoria are facing fresh delays.

Click here for more information on how Southern services are affected.

#Brighton The derailed train has been removed & lines handed back – residual delays will occur as services recover. @nationalrailenq

The train came off the tracks at about 2pm yesterday, stopping services entirely for almost two hours and severely disrupting them for the rest of the day and this morning.

The angle the train was at and the height of the conductor rail height prevented engineers from removing it last night.

Anyone who faced significant delays is able to claim compensation – click here for more.