Case against Ecostream protester collapses because Nazi jibe was too general

The case against a protester accused of racially harassing a Jewish woman has collapsed – after last-minute video evidence showed his Nazi jibe was shouted at the crowd, not just her. 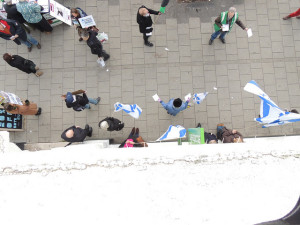 Opposing sides in a different Ecostream protest. Picture by Camilo Jeremias on Flickr

Palestinian Yasser Samman, 64, who now lives in Brighton, was on trial last Thursday after being arrested at a demonstration outside Ecostream in Western Road.

The eco refill store was subject to protests from pro-Palestinians over parent company SodaStream’s factory in the contested West Bank area of Israel most weekends for the two years it opened  from 2012 to 2014.

And they were often met by counter protests from Israeli supporters from the Sussex Friends of Israel, as was the case on 17 May, 2014 when the incident in question happened.

Mr Samman was accused by one of the counter protesters of calling her a “f***ing Nazi”.

But video footage introduced halfway through the trial showed that while he did indeed shout “Nazi”,  he did not single her out.

Because this contradicted the prosecution witnesses, the case was dismissed.

Speaking after the case, Mr Samman said his use of the word Nazi was not racially motivated.

He said: “There are all kinds of Zionists – it’s a political movement, not a religious one.

“If I am to say you are a Nazi, to a Zionist I’m indicating that what Zionists are doing to Palestinians is similar to what the Nazis did.”

Fiona Sharpe, co-chair of the Sussex Friends of Israel, said: “The word Nazi was used, and that was never denied. It certainly felt at the time for the person who was the key witness that she was being called a Nazi.

“It’s an incredibly emotive word. Context is everything and when using the word Nazi to a group of Jewish peeople, it’s an offensive term.”

CPS South East Chief Crown Prosecutor Jaswant Narwal said: “The CPS keeps all its cases under ongoing review and we are satisfied that, in this particular case, with the material available to us at the time, that there was enough evidence to provide a realistic prospect of conviction.

“This only changed when video footage of the incident was produced for the first time in the middle of the trial, which is highly unusual.

“This contradicted the evidence of prosecution witnesses and the district judge dismissed the case as a result.”