A group of campaigners have set up camp at the Old Steine to raise awareness about homelessness. 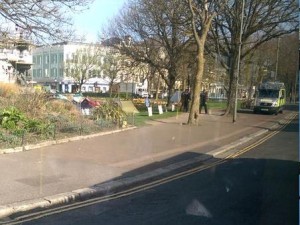 The group have been by the fountain in Brighton since Wednesday’s homelessness march.

They have scaled the Victoria fountain and put up banners to broadcast their message to the city.

And it is also calling on people to join the camp to help its cause.

In a statement on its Facebook page, the group said yesterday: “Occupy Democracy Brighton had a general assembly this morning and have decided to stay occupying the Old Steine again tonight to continue awareness raising of the criminalisation of homelessness.”

It added: “A couple of hours before the assembly, a police officer swung by to ask us about our plans for the day.

“We gave a brief reply about having breakfast and a general assembly to which he responded that he would let us get on with it and that he has not received any orders.”