Thousands of passengers will be eligible for compensation after being delayed by a derailed train just outside Brighton Station this week.

Driver error is thought to be to blame for the empty passenger train coming off the tracks on its way to the depot at 2pm on Wednesday. 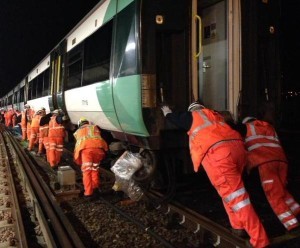 The derailment damaged power cables, leading to the closure of the lines and bringing services to a standstill for almost two hours.

Serious disruption followed for the rest of the day – and the next morning after engineers failed to right the train overnight.

Southern Railway’s deputy managing director David Scorey apologised for the delay, adding: “The re-railment of the train, which we had hoped would be completed overnight, took longer than anticipated and as a result, we were unable to run trains between Preston Park and Brighton.”

The unofficial Brighton Station Twitter account explained: “The naughty train had to have the three rear carriages removed, but the angle of the dangle prevented this from happening in a timely manner.

“The initial lift was aborted due to problems involving the conductor rail height. The window was only a few hours, so was lost, sadly.” 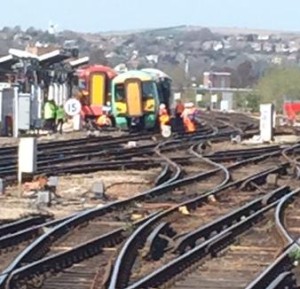 The cause of the incident is under investigation, but Southern said that driver error appeared to be to blame.

Rail replacement buses were called into action throughout the Wednesday evening and Thursday morning rush hour.

Anyone facing delays of more than 30 minutes is eligible for compensation under the Delay Repay scheme.

The incident comes after months of delays and disruption on the Brighton mainline while work takes place to modernise London Bridge, one of Britain’s busiest stations.

In February, train bosses pledged to hire more staff and fix faulty signals as part of an action plan to improve services. They will also put more trains on the line, improve track drainage and cut maintenance time.

Caroline Lucas has called for an overhaul of the compensation system to make it simpler and extend it to people subject to shorter but repeated delays.

A survey by Passenger Focus, now called Transport Focus, in 2013 found that only 12 per cent of eligible passengers claim refunds.