A broken metal trim on a manhole cover in Western Road pierced a pedestrian’s leather trainer. 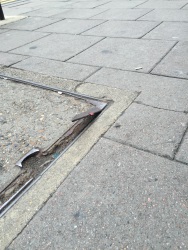 The cover, outside the Sainsbury’s Local opposite the junction with Preston Street, was reported to Brighton and Hove City Council on Monday via the FixMyStreet website.

The report said: “Outside Sainsburys local by the cashpoint, a large piece of metal is sticking up. So sharp it went straight through a leather trainer. No markings on the cover itself.”

A spokesman for Brighton and Hove City Council said: “We sent an inspector out to look at this as soon as it was reported. When he got there the sharp piece of metal sticking up was no longer there.”