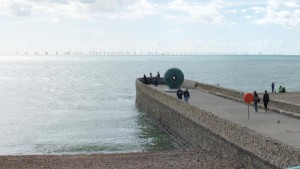 Plans for between 100 and 175 turbines were approved by the Government last summer, in the face of opposition from the South Downs National Park Authority, as the underground cable will pass through the park.

Today, E.ON and the Green Investment Bank confirmed they will invest, and construction of the onshore substation in Twineham will begin in June, and the 116 turbines 13km off the coast early next year.

This number of turbines will create energy for about 300,000 homes with a capacity of 450MW, and E.ON says more than 600 jobs will be created through construction to operation.

E.ON UK Chief Executive, Tony Cocker, said: “This is an important milestone for what is a strategically important project for the UK.

“At around £1.3bn this investment by E.ON and our partners at the Green Investment Bank could be one of the biggest capital projects confirmed in Britain this year and we are proud of the leading role we are continuing to take in helping to transform the UK’s energy infrastructure.”

Construction of the onshore substation in Twineham is planned to start in June, closely followed by preparation works for the onshore cable route.

Offshore construction will commence in early 2016 with planned completion in 2018.

E.ON will be holding community information events over the forthcoming weeks and months to keep communities local to the construction site informed.

During the planned three-year offshore construction period it is estimated that around 250 to 300 jobs will be created and local vessels used, with 40 roles being based at the project management facility in Newhaven Port.

It is expected that a workforce of up to 100 will be needed for the onshore cable route and around a further 40 to 60 people at the onshore substation during onshore construction.

Once the wind farm is commissioned and fully operational, it is envisaged that up to 65 full time permanent jobs will be created at the operations and maintenance base.

The Rampion project remains set to become the first offshore wind farm off the south coast of England.