Thousands pedal into town on the London to Brighton Bike Ride

Thousands of cyclists have been arriving on the seafront at the end of the London to Brighton Bike Ride.

About 28,000 cyclists are expected to take part in the ride, now in its 40th year. It is one of the biggest fundraising events of the year for the British Heart Foundation. 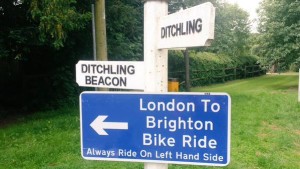 The 54-mile route starts from Clapham Common, in south London, and ends in Madeira Drive, on Brighton seafront. It takes in Ditchling Beacon along the way and 15 rest stops in total for those in need of refreshment or a pit stop.

The first cyclists set off at daybreak on the longest day of the year. And crowds have been watching and welcoming the cyclists arrive at the finish line.

Brighton and Hove Buses have had to make some changes to routes and running times.

And some roads have been closed. Brighton and Hove City Council said: “Parts of the route will be closed to traffic from 7.30am to 9pm.”

The roads to be closed are

Others roads are affected by changes at junctions – no left or right turns p or reversed traffic flow and diversions. For more information, visit the council’s travel news web page.