Super dog Agua is back home after climbing two mountains in just 24 hours to raise money for charity. 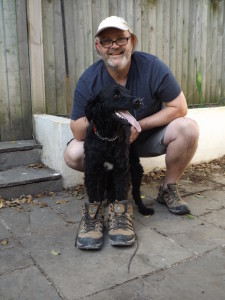 The rescue dog from Hove accompanied his owner Ian Hallworth who was attempting the Three Peaks Challenge over the weekend.

Agua, a Portuguese water dog, has accompanied designer Ian throughout their training for the challenge with their group called Premature Peakers. The group have all suffered heart conditions and met at FitClinic, an exercise group based in Hove.

Ian, 45, from Hove said: “Everyone wanted Agua to come with us as he was like a lucky mascot for us. He’s not yet two and hasn’t seen snow yet, so was very excited at the top of Ben Nevis.

“We came down Ben Nevis at about 12.30am, so he was quite tired as his bedtime is usually about 9pm. But he was raring to go again when we climbed Snowdon.

“He’s a really active dog and loves his walks and swimming in the sea. I couldn’t be more proud of him. He’s received lots of cuddles from the whole team.”

To donate money to the Sussex Heart Foundation you can visit https://www.justgiving.com/IanHallworth/.