A 19-year-old man required hospital treatment for a head wound after he was assaulted in Brighton in the early hours of yesterday morning. 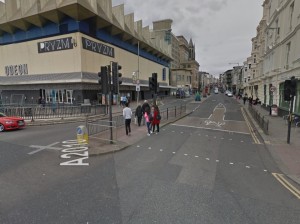 Police were called to the bottom of West Street shortly after 5.30am where a fight had been reported. The injured man, from Surrey, is believed to have been hit with a bottle and was taken to the Royal Sussex County Hospital in Brighton. He was discharged after a small wound to his head had been stitched.

Anyone who witnessed the incident who hasn’t yet talked to police is asked to email 101@sussex.pnn.police.uk or call 101 quoting serial 271 of 27/09.

A 20-year-old man from Southwick was arrested on suspicion of grievous bodily harm with intent and after questioning was bailed to return on November 11.