A Brighton cyclist has raised almost £2,000 for the local YMCA in a 340-mile ride from Penzance to Buckingham Palace.

The ride took four days and Mr Colmer was one of 10 cyclists on the route. A second group, consisting of a dozen cyclists, set off from the Lake District National Park before also finishing in London.

The money raised will go towards improving communal areas at YMCA DownsLink Group supported housing projects to promote a sense of community among the residents. 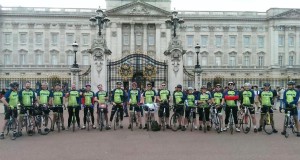 This is being done in consultation with the residents so they have an input into how the money is spent.

Mr Colmer, who works for the charity, said: “What a challenge! We were all nervous the day before the ride but once it started the nerves went and the sore legs started.

“It’s been a fantastic way to support the YMCA and get our story out to the local community and beyond.

“I’m always amazed at the generosity of the people who have donated, especially local contractors whose donations have made a big impact.”

Places for the tour were open to the charity’s staff, volunteers and members of the public who wanted to support the efforts of the charity in helping disadvantaged young people.

Tour de Y organiser Graham Oatridge said: “Seeing it through to the end meant a lot for the cyclists and their supporters.

“To spend four days cycling through England is a real achievement and I hope we’re able to inspire others to think of and take part in fundraising initiatives like Tour de Y in the future.”

Anyone wishing to donate to Mr Colmer’s fundraising total can visit his appeal page at www.justgiving.com/Pete-Colmer.

The YMCA DownsLink Group provides a wide range of services to more than 10,000 children, young people and families across Brighton and Hove, Sussex and Surrey.