The Seagulls drew a pulsating match which at times was an end to end battle of two teams determined to grind out a win.

Albion captain Gordon Greer missed a glorious opportunity to put to bed the Seagulls October hoodoo, as he  failed to connect effectively with a Solly March cross that fizzed along the goal line.

Greer himself instead of the ball ended up in the net.

The Seagulls were 1-0 down within five minutes of the start. A quick and decisive Cardiff break involving Kenwynne Jones and Scott Malone saw Joe Mason slide the ball past David Stockdale. 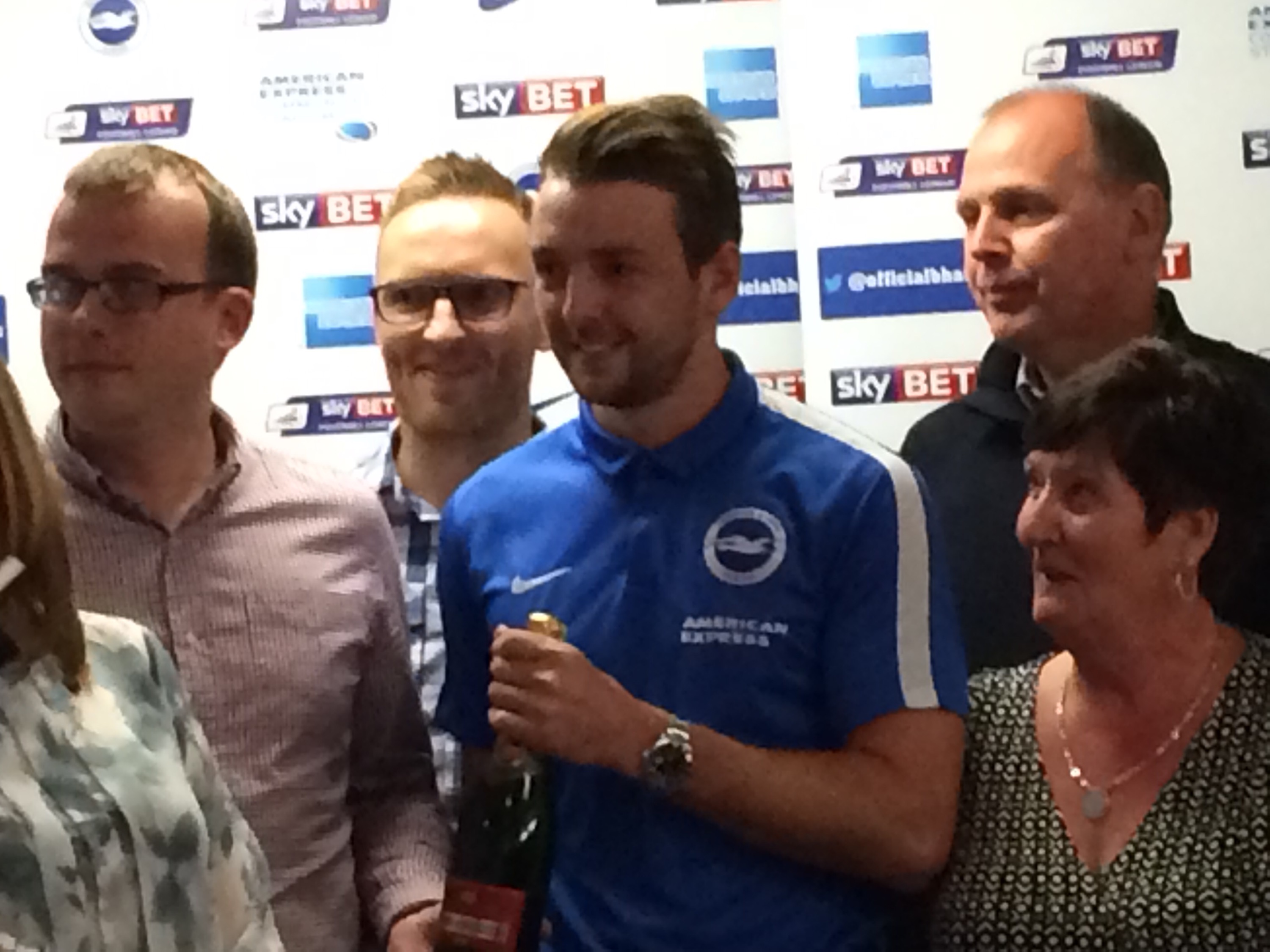 Man of the Match and scorer Dale Stephens with Match Sponsors – Macmillan.

Albion were not that quick to react as the recalled Solly March found the ex-Manchester United defender Fabio Da Silva a tough opponent.

Albion were finding their feet a little more as the midway point in the first half was reached.

Liam Rosenior was beginning to get into some decent crossing positions and was being well supported by Bruno Saltor.

Last season Albion were frustrated at the Amex by Cardiff keeper David Marshall. This time it was Moore providing the heroics. First he spreadeagled himself to deny Baldock then saved the follow up shot from Rosenior.

Before half time Tomer Hemed hit a shot into the side netting which some in the East Stand might have thought was in.

The first half was almost all about Albion and the second started off in the same vein.

As Albion continued to press Baldock glanced a header wide from a Bruno cross.

From then on the game was end to end, both teams attacking at any opportunity. A Sean Morrison header was well held by Stockdale.

Kayal was winning everything in midfield and combining with Hemed created a chance for March which again Moore saved.

March was now showing his real potential and was giving Da Silva a torrid time.

But Cardiff were not seemingly content with a draw.

Sammy Ameobi drifted past Greer but Dunk was on hand to clear off the line, with Stockdale beaten.

As full time approached Albion had Bobby Zamora and Elivs Manu as their strike force.

Albion had a great shout for a penalty as March was bundled over in box, but referee Charles Brakespeare waved appeals away.

March, Stephens and Kayal were still dominating midfield but the clear cut chance just wouldn’t materialise, despite Zamora jostling for space in the box.

With four minutes of injury time ticking down, March weaved through the penalty area and lobbed in a cross. Manu couldn’t quite get there but Greer, steaming towards the far post, got what appeared to be a vital touch, only to see the ball squirm the wrong side of the post. The Seagulls captain laying head in hands in the net.

A season high attendance of 26,399 were at the Amex to see Albion stay top of the Football League – two points clear of nearest pursuers Middlesbrough going into the international break.

The Seagulls are now the only unbeaten league team in England. And only Glasgow Rangers match that feat in British football.