The event was jointly run by Arka Funerals, the Modern Funeral and Wild Arts with the aim of dispelling the secrecy around death.

A coffin was carried through the streets before the event got under way at the Upper Market Street venue. 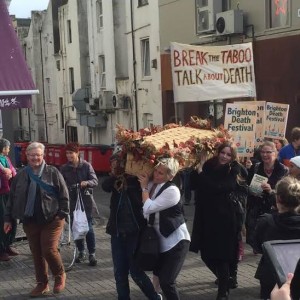 It included a performance – Confessions of a Funeral Director – intended to show how a funeral could be managed and run by family or friends after someone’s death.

The event also included the chance to decorate a coffin and a presentation on the future of death.

Sarah Clarke-Kent, 49, a funeral director at Arka Funerals, in Surrey Street, Brighton, said: “Death is something so important. It affects everyone so much and there is a much better way of dealing with it.

“We’re trying to open things up and make death a lot less shrouded in secrecy.

“People need to take more ownership and control of the process after death and having a more creative and invigorated approach to the whole funeral process is key.”

Tora Colwill, 32, from the Modern Funeral, in Warleigh Road, Brighton, said: “It’s only in very recent history that we’ve built such a taboo up around death.

“I think you struggle to find cultures throughout the world and history that deal with it with quite the denial that we have currently.”

She said that the natural way was to be closer to the idea of death, something that the festival hoped to achieve.