A Brighton potter whose creations brightened up the North Laine for many years, and who helped set up the area’s traders’ association, has passed away. 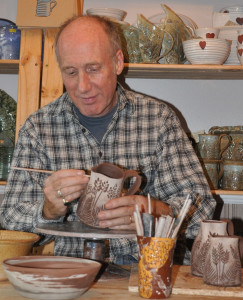 Peter Stocker, known as Peter the Potter, was well known for his Workshop Pottery in Trafalgar Street, which he ran with his wife Sally for 29 years before they moved to Aylesbury.

His funeral is next week in Milton Keynes, and his family have also arranged a celebration of his life at Brighton Marina later this month.

Sally Stocker said: “The funeral next week will be low key with family and friends from this area.

“In addition we are planning an event to mark Pete’s death and celebrate his life with our many southern friends in the place we spent many happy years where we met, married had a business and brought up our children.

“This will be held on Friday, 20 November from 3pm till 8 pm at the Master Mariner in Brighton Marina. We will be pleased for anyone to join us there.”

Writing on the North Laine Community Association site, Maureen Brand said: “Peter – Peter the Potter – had a shop for many years, the Workshop Pottery, in Trafalgar Street.

“Peter was always there to give advice and assistance. So many of us sat on the stool in his Pottery and sought his advice. He will be sadly missed.”