Albion broke an 80-year-old unbeaten run with their win over the MK Dons at the Amex this afternoon (Saturday 7 November).

The teams, officials and supporters respectfully acknowledged the remembrance silence prior to the match as the local Salvation Army band played the Last Post before kick off. 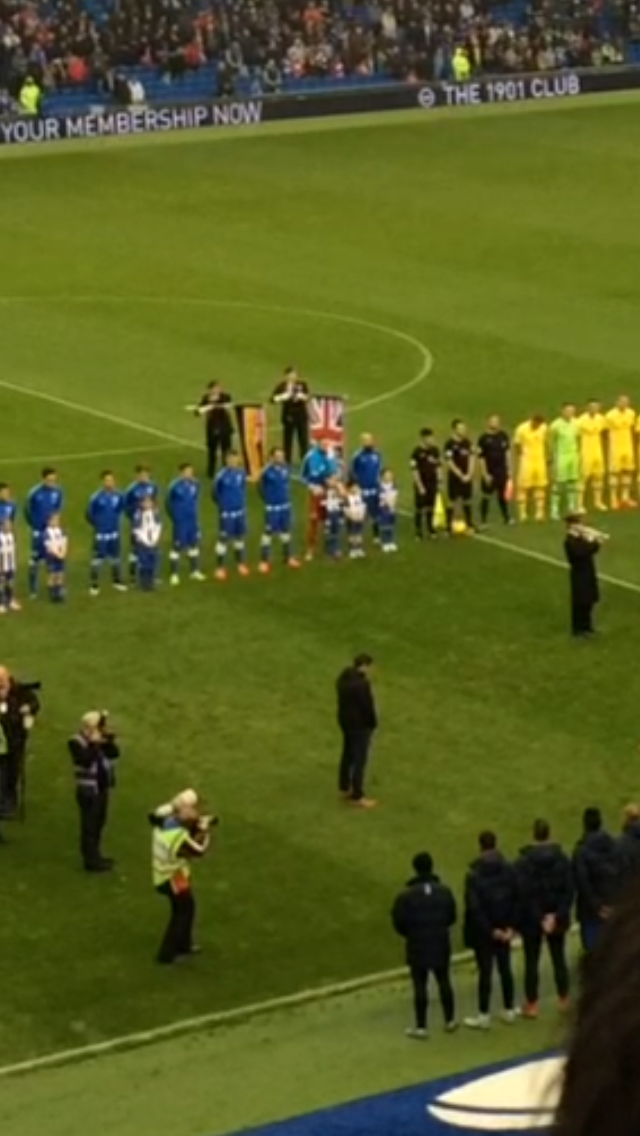 Albion went in front soon after kick-off. A Jamie Murphy corner fell to Solly March who fired a shot from fully 25 yards past Dave Martin in the MK Dons goal.

The Seagulls, with Jamie Murphy and Solly March and the wings and Beram Kayal and Dale Stephens fully restored in midfield, looked a powerful attacking force.

March ran at the Dons defence and found Sam Baldock. The former MK Dons forward wriggled and played the ball through to Murphy who, from the edge of the area, swept it past Martin to double Albion’s lead.

March then tried his luck again from distance.

The two Albion wingers were terrorising Dean Lewington and Darren Potter at the back for the Dons.

But the former Wimbeldon team got a goal back in almost their first attack.

The much-travelled Nicky Maynard, with his back to goal, turned away from a hesitant Lewis Dunk to fire past David Stockdale from the edge of the area to halve the deficit.

Before half time Albion tried to restore their two-goal lead. Tomer Hemed headed wide, when well placed, from a Murphy cross.

Hemed tried an audacious flick as the ball buzzed around the penalty area, then just before half time the Israeli international hit the inside of the post and the ball bounced to safety.

Albion tried to pick up where they had left off in the second half.

It’s a few years since Bowditch played for Albion. The ex-Ipswich player was brought in during Dean Wilkins’s reign – eight managers and two stadiums ago.

Not long after this, Baldock appeared to twist his knee and was replaced by Bobby Zamora.

The Zamora Hemed partnership is largely untried and Albion could not seem to get a shot on goal.

The visitors had a very good shout for a penalty as Dunk clattered into Samir Carruthers. The referee nor assistant thought it was a foul as most of the Amex held its breath.

MK Dons manager Carl Robinson was incensed for a good few minutes, holding his arms out in apparent disbelief.

Both Liam Rosenior and the ever reliable Bruno Saltor were getting forward for Albion.

Murphy saw a weak shot saved by Martin. Every time Albion attacked, Kyle McFadzean grabbed large handfuls of Zamora’s shirt. Eventually Zamora lost his cool a little as he flicked an elbow towards McFadzean then clattered Carl Baker. The Seagulls living legend got a yellow card for his trouble.

Bowditch tangled with Uwe Hünemeier in the Albion penalty area but again the ref waved play on.

Elvis Manu got 11 minutes at the end, replacing Murphy, but the Dutchman flattered to deceive.

Manu failed to beat his man as he ran at a tiring defence and pulled a couple of shots well wide when well placed.

Albion held on for a much-needed win, one that was vital if they are to continue the promotion push.

The Seagulls next travel to third place Burnley after the international break for a lunchtime kick-off on Sunday 22 November in front of the Sky Sports cameras.