The campaign against plans to merge and close children’s centres is preparing to relaunch as the proposals come back onto the table. 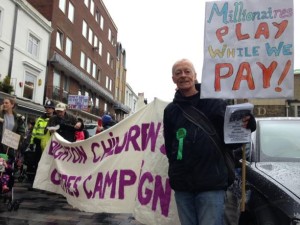 Brighton and Hove councillors will discuss plans to downgrade and merge four centres and stop using Cornerstone in Hove for children’s services altogether next Monday.

These plans go slightly further than those scrapped in February after a year’s extra funding was found to keep the existing service going. But that funding is now running out, and yet more savings need to be found as the council’s Government grant is slashed by £25m.

One of the founders of the Brighton Children’s Centres Campaign, Leila Erin-Jenkins, said: “We will be producing a petition and hope to get enough signatures to present at a council meeting and trigger a full debate.

“We will be encouraging everyone to fill in the consultation to let the council know their views on these disastrous proposals. In addition to this we will be planning a demonstration to protest against these cuts.

“Once again the council is shortsighted and about to make a huge mistake which will have a devastating impact on children, and families as a whole, right across our city.

“The council should be prepared, we have hundreds of parents and carers preparing to fight back to ensure these vital services remain.”

The plans propose merging The Deans with Roundabout, West Hove with Conway Court, Hollingbury and Patcham with Hollingdean and City View with both Tarner and Moulsecoomb.

However, baby groups open to all parents would continue to be offered at sites where they’re currently run, with at least one toddler group a week run at all existing centres except Meadowview, which is poorly used.