New homes plans for site where thousands of Brightonians were born

The site of an old maternity hospital where thousands of Brightonians (and Hovites) were born is set to be turned into homes. 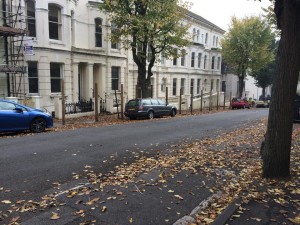 The block in Buckingham Road, more recently home to a mental health centre and council-run day centre, have just been sold to a company owned by entrepreneur and bookseller Philip Blackwell.

Until September last year, the Victorian terraces at 76-79 were used by Sussex Partnership NHS Trust as a mental health recovery centre, but when the city council announced it was selling the site early last year, the services were moved to nearby Frederick Place, with the day centre at number 80, a 1970s building, closing in March.

But from 1913 until the 1960s, they were home to Sussex Maternity Hospital, before obstetrics moved to the Thomas Kemp Tower at the Royal Sussex in 1970.

The buildings have now been boarded off for security purposes, with fencing blocking the pavement ready for renovation and demolition work to commence.

Mr Blackwell said: “The project is at an early stage of seeking planning consent. We are currently consulting widely with all interested parties on our outline plans and expect to submit formal plans in the next two to three months.

“What I can tell you is that we have engaged the leading architects Make and are committed to creating a residential building that is sympathetic to the local vernacular and  the local community will embrace. We wish to be good neighbours!”

The leasehold of the building was marketed by Cushman and Wakefield as an “outstanding development opportunity in the heart of Brighton” with a 250-year lease at a peppercorn rent.

A council spokesman said: “We have licensed a hoarding around the building for demolition and renovation of some parts of the site. The hoarding has been agreed with the footway closed to protect public safety. There is a protected walkway around the site to aid pedestrians.”