The cancellation of a Christmas charity show at the eleventh hour because of health and safety fears has left organisers “gutted” and confused. 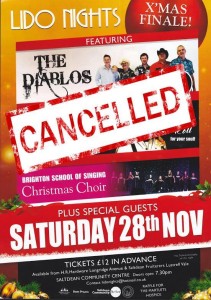 The news follows an outcry when the new trustees of the association which runs the centre, part of the Saltdean Lido complex, announced they were considering closing it just after taking it over – to the shock of trustees who were standing down.

Now, the final Lido Nights show, billed as the “last ever” with the impending renovation of the lido itself, has been cancelled.

Organiser Chris Nieto said: “It was a huge shock because the timing of it was less than two weeks before the show started and pretty much had been done, including selling most of the tickets.

“I’m gutted. I put a lot of work into this, a lot of organising. As well as three bands, we had a choir with local kids that were going to perform and they’re desperately disappointed.

“We would have raised about £2,000 for the SCA and also money for the Martlets – last year we raised £1,200 which we split between the Martlets and another hospice, St Barnabas, with a raffle.”

A smaller show will now be put on at the White Horse, with a bucket handed round to raise money for the bands, which are out of pocket as they had kept the date free and will not now be paid.

The show had been organised since June and the outgoing trustees say all licences, insurances and safety certificates were in place.

Former trustee Ethel Trigg said: “Before we handed over the building to the new trustees we had our own risk assessment carried out in the presence of Brighton and Hove City Council and everything was up to standard.

“The new trustees’ individual risk assessment must obviously be contradictory to ours.”

Mr Nieto says he offered to pay for any extra insurance and believes that any health and safety issues raised by the new trustees, such as contractors’ equipment left by fire exits, can easily be overcome.

In a letter sent to members of the SCA, new chair Cathy Gallagher said: “We have also been reviewing health and safety matters and carrying out a risk assessment.

“There has been an urgency about this as we were being asked to confirm that the Lido Night event scheduled for 28 November 2015 would be supported by the trustees.

“We realise that there will be a disappointment for all of those who were looking forward to the event and we are really sorry about that, but we hope you will understand that health and safety has to be our main priority at any event, no matter what the cause or beneficiary.

“As trustees it is fair to say we are risk averse as we consider we have a duty of care to all visitors to the community centre.”

She also said that the SCA would be concentrating on its role to benefit the inhabitants of Saltdean to advance education and provide facilities in the interests of social welfare rather than securing the establishment of a community centre as the long-term renovation of the lido meant “there is inevitably going to be an adjustment to the role of the SCA”.

Rebecca Crook, director of the Saltdean Lido CIC, confirmed its plans include both a new library and refurbished rooms for community use and hire.

A spokeswoman for Brighton and Hove City Council said: “We are negotiating with the Saltdean Community Association about a new lease. The current lease expires on December 20.”

Anyone who has already purchased tickets for the show will get a full refund. Simply take your tickets back to the point of purchase. Anyone with problems or questions can email lidonights@hotmail.co.uk.