A “Boris bikes” scheme for Brighton and Hove was given a boost yesterday (Tuesday 24 November) when councillors agreed that a contract should be put out to tender.

The local version – the Brighton Bike Share scheme – is expected to start with 430 bikes available from at least 50 hubs or docking points throughout the area. 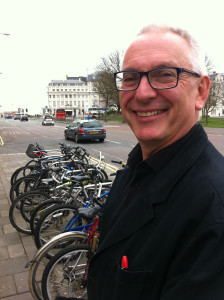 The aim is for cyclists to be able to hop on or off a bike along the seafront and near the tourist attractions in the centre of Brighton.

The scheme, being developed by Brighton and Hove City Council, would also operate along the A27 corridor, heading to and from the university campuses at Falmer.

If everything goes to plan, cyclists will be able to start using the Brighton Bike Share scheme in about 18 months’ time – in May 2017.

It will be run by a private operator on a three-year contract but with an option to extend the contract.

Former Green councillor Ian Davey, who helped steer the scheme through its initial stages, sat in the public gallery at Portslade Town Hall as the council’s Environment, Transport and Sustainability Committee gave its support.

Councillor Gill Mitchell, who chair the committee, said: “This is an exciting scheme that should work well for the city. The aim is to provide a flexible service, working alongside existing cycle hire providers and which gives more choice to those who live, work or visit here.”

The council said: “Research by the council’s Transport Planning Team has revealed demand for bike hire in the chosen areas.

“Many homes in the densely populated seafront areas do not have space to store bicycles securely.

“The proposed date for rolling out Bike Share is May 2017. At this stage the preparation is about ensuring an effective and fair procurement process and the report before the committee … is about seeking a suitable provider of the service.

“The chosen supplier would commit to an initial three-year contract and be required to supply the bikes plus associated equipment as well as management and maintenance of the service.

“A separate report … at the same committee calls for additional cycle parking provision for bike owners.

“Locations for new facilities are selected based on demand and the practicality of installation.

Councillor Mitchell added: “We know there is a demand from residents for increased cycle parking facilities and we are very pleased to be able to respond to these requests.”