Any trainspotters at Brighton Station last night would have been in for a treat as the next generation of Thameslink trains completed its first ever UK test run. 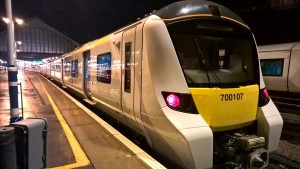 Govia Thameslink Railway took Siemens’ Class 700 train on its first-ever test run on national rail tracks between its depot at Three Bridges and Brighton in Sussex.

The 240m 12-carriage train – half as long again as most Thameslink trains operating today – passed initial tests that proved its compatibility with signalling and will now begin other night-time test runs out of passenger service.

Govia Thameslink Railway Programme Director Keith Wallace said: “The train performed excellently. This test run is a real milestone in the government-sponsored Thameslink Programme which, from spring next year, will steadily give passengers these new, modern and spacious trains on the Thameslink route.

“Passengers at other stations on our Peterborough and Cambridge Great Northern routes into London will begin using these trains later on as will people elsewhere in the South East when the Thameslink network expands in 2018.”

Siemens Thameslink Programme Director Dave Hooper said: “We are delighted to see the Class 700 out on test on the mainline. This is significant step in our comprehensive testing programme, and is a result of a lot of hard work from the whole Thameslink team. We look forward to the Class 700 going into passenger service in spring next year.”

The introduction of the new 12 and eight carriage Class 700 trains will significantly increase capacity across all routes, providing 80% more peak seats across the central London route, between Blackfriars and St Pancras where there will be automatic train operation and up to 24 trains per hour in each direction in the peak.