A thief has stolen a van and a dog called Indie belonging to a painter and decorator from Hove.

Sussex Police said that the red Fiat Diablo van and Indie, a German shepherd, were stolen from Cumberland Road, in the Preston Park area of Brighton, this morning (Tuesday 9 February).

The force said: “Have you seen a red Fiat Diablo van, AK05 DZZ, which was stolen from Cumberland Road, Brighton, between 10.15am and 10.30am on Tuesday morning (9 February)?

“Inside was a nine-year-old black and tan German shepherd dog, Indie. She is a very placid dog and was in the van while her owner, a painter and decorator from Hove, was working near by. 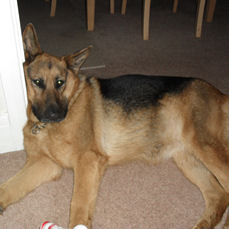 Indie was stolen along the van from a Brighton street

“She was wearing a black collar with no identity disc but is microchipped.

“Police were told, searched the area and circulated the description of the van and Indie to all units but they have not yet been found.”

PC Richard Jackson said: “Indie’s owner is very upset and worried about her. If you have seen her or the van please let us know right away.”

Anyone with information should phone Sussex Police on 101 or email 101@sussex.pnn.police.uk.