Police have released CCTV images of three men wanted in connection with an unprovoked attack in Brighton. 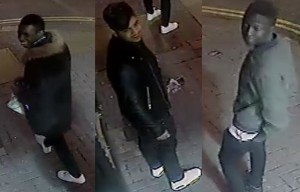 A Spanish man was walking up West Street towards the Clock Tower with a group of friends at about 4.10am on 12 December when he was approached by two men, one of whom became verbally abusive and punched him in the face.

The victim flew home for the Christmas period a few hours later and underwent surgery for a fractured jaw.

Investigations into the incident have now identified CCTV in the area of three men wanted in connection with the assault.

Officers are keen to speak to the trio, who were seen in the vicinity of Cheeky Chicken takeaway, close to the junction with Boyces Street, around the time the offence occurred.

The first man is described as black, tall and skinny with short black hair, wearing a buttoned up white polo top under a black jacket with a fur-lined hood, tight black trousers and white trainers.

The second man is described as Asian, with black swept-over hair and facial hair. He was wearing a sparkling earring in his left ear, a black leather jacket with distinctive zip features, black trousers and white trainers.

The third man, who is believed to have been in the takeaway restaurant when the incident happened, is described as black, skinny, with short black hair, and wearing a khaki green jacket over a white tshirt, black trousers and black trainers.

It is believed the men may be from London.