i360 apologises again to neighbours for noisy cables

The i360 has apologised to neighbours who were kept up last night by slack cables clanking in the wind, which one resident has likened to the noise from a foundry. 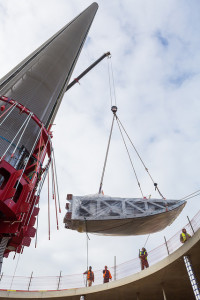 The cables were left loose by workers on the site by mistake, which allowed them to crash against the tower in the high winds, with the noise being heard far and wide.

The cables had previously disturbed residents of Regency Square for weeks last year, but in December i360 bosses said they were confident the issue would be fixed once the pod is in place.

But last night, a platform which is meant to be kept at the top of the tower overnight was left at the bottom, meaning the cables were free.

i360 chief executive Eleanor Harris said: “I would like to sincerely apologise to anyone who was affected by the noise from our site last night. The noise was caused by cables hitting the tower as a result of a temporary engineering works platform being left at the bottom of the tower, rather than at the top of the tower.

“This was a mistake by our contractors Hollandia. Unfortunately we were unable to resolve the issue overnight.

“In future, we will ensure the platform is parked at the top of the tower at the end of each day, which will minimise any noise.

“The excessive noise created was not in keeping with the care and consideration we give to ensuring our construction works have minimal impact on residents and we have fallen short on this occasion.

“We will do everything we can to keep noise levels to a minimum in future, however there may be occasions when high winds will cause some noise until the pod is completed towards the end of March, when test flights on the pod will begin and the cables will be fully tensioned for the first time.

“We will be writing to our neighbours who live within 200 metres of the site who were most adversely affected last night, with a personal apology from me and offering them free tickets for i360 flights, as a gesture of goodwill.

“I must apologise again and stress we will do everything we can to minimise disruption in future.”

He said: “The noise is continual, day and night, but more obvious at night once the white noise from daytime traffic has ceased. It never stops. It has been going on like this for at least six months.

“Strangely, the irritating sound wasn’t as loud at the i360 site when I went out tracing the sound source and I am assuming that the echo effects of the tall Regency buildings amplifies the sound of metal clunking and clacking the further it travels.

“The white noise of passing A259 traffic appears to mask this sound during the day and it only becomes so apparent later into the evening and night.

“I have had to go to sleep with music playing for months now; anything to stop hearing that irritating sound. During the evening the noise spoils the time that I like to relax with peace and quiet; it makes me irritable and uneasy.

“It is as if I am living and sleeping in, or next to, a foundry or large industrial factory.”