The Older People’s Council has criticised proposed changes to bus pass conditions as Brighton and Hove City Council prepares to set its budget for the year ahead.

It said: “The speculative saving of £40,000 is a drop in the ocean compared to the money the council is gaining from parking and will be seen as such.”

But the Labour-led council said that it had taken on board feedback and looked elsewhere in the budget for savings from the new financial year in April.

The change was included in the small print of a 450-page bundle of papers published before the meeting of the council’s Policy and Resources Committee and voted through this afternoon (Thursday 11 February).

The Older People’s Council said: “The OPC believe that very few people in the city know about the proposal in the budget to restrict the use of bus passes until after 9.30 in the morning and 11 at night.

“For those that travel to medical appointments, social activities, caring responsibilities or volunteering groups across the city this will have a large impact for a small financial saving.

“If you live in Mile Oak, Hangleton and Knoll, Patcham or Saltdean and need to get to the Royal Sussex County Hospital for 10am you will have to pay or change your appointment. 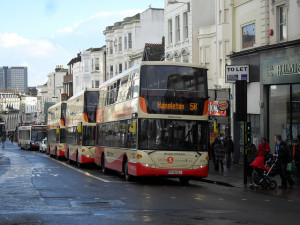 Buses in North Street. Picture by Matt Davis on Flickr

“Many thousands of pensioners are on low incomes as are many people with disabilities.

“Many blood tests have to be done early in the morning so many people will have no choice but to travel.

“Health needs are much higher for older people with 51.9 per cent of over 65s in this city with multiple long-term illness or disabilities.

“Much is written about the detrimental effects of social isolation and for many older people the use of the bus pass is literally a lifeline.

“Restricting its use may seem like a small change to some but for many people in this city it will be another blow to their quality of life.”