A Brighton-based union boss has urged a cabinet minister to resolve a row over payments to NHS workers who volunteered to risk their lives taking care of patients with ebola.

Ian Evans, who chairs Unite’s healthcare sciences national committee, is due to travel to Sierra Leone himself next month.

Mr Evans, a biomedical scientist, wrote to International Development Secretary Justine Greening to speak up for volunteers from the NHS who helped tackle the deadly ebola outbreak in West Africa.

He said that about 200 NHS workers and academics who had risked their lives had been denied a £4,000 payment given to colleagues working for Public Health England (PHE). 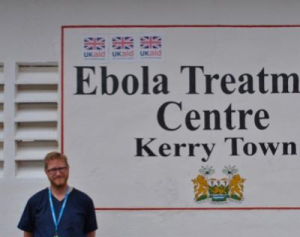 Unite, Britain’s biggest union with 100,000 members in the health service, has twice written to the Ms Greening asking her to rectify this “huge inequality”.

The union said that the payment was made to about 250 staff from Public Health England (PHE), including the Defence Science and Technology Laboratory (DSTL) and Public Health Wales (PHW). The money for working in Sierra Leone was reimbursed by the Department for International Development (DfID).

But Unite is concerned that the NHS and academic volunteers have, so far, been denied the payment even though they worked in the same life-threatening situations.

The union said: “Those that went to West Africa did not go, risking their lives, for financial reward but there should not be a two-tier bonus payment system.”

Mr Evans has twice written to Ms Greening about the payments but has yet to receive a reply.

Next month he is heading to Sierra Leone for four weeks to help set up a “legacy” centre in preparation for another possible outbreak of Ebola.

Mr Evan is using his annual holiday entitlement, having already been to the country last August for five weeks.

In his letter Mr Evans said: “There was recognition that colleagues who worked over the Christmas (of 2014) would receive a one-off financial payment.

“This later became a payment for all PHE employees and, after a prolonged negotiation, also to PHW staff that were deployed to Sierra Leone.

“However, there was a caveat attached that these payments would be for PHE, DSTL and PHW colleagues only.

“This has resulted in a situation where the aforementioned scientists will receive over £4,000 more than volunteers from the NHS and academia who are of equal merit and who are qualified and trained to the same level.

“As you can appreciate this is a huge inequality and needs to be addressed. We all acknowledge that colleagues who volunteered to be deployed did not do this because there was a financial incentive but it does not excuse a two-tier payment scheme.

“We believe that all volunteers, who were deemed suitable by PHE and trained by the Novel and Dangerous Pathogens Team at the Porton Down facility, should be remunerated in the same manner.”

After more than 11,000 deaths over nearly two years, the West Africa ebola outbreak was finally declared over last month – on Thursday 14 January.

But the next day Sierra Leone officials confirmed a death from ebola. The World Health Organisation has warned that more flare ups are expected.