Fire breaks out in ninth floor lobby of towerblock flats

Firefighters were called to another blaze in a residential towerblock yesterday – but fortunately, it had been put out by a quick-thinking resident. 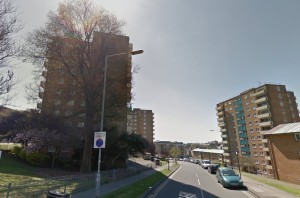 The fire started in the lobby of the ninth floor of the block in Grove Hill, Brighton. Crews from Preston Circus and Roedean were called out at 4.41pm.

On arrival crews confirmed there had been a small fire in the lobby area of the ninth floor. The small fire had been extinguish by a resident.

Firefighters used small gear to ensure the fire was fully extinguished before leaving the scene at 5.08pm.

Another high-rise blaze on Saturday in Essex Place, Kemp Town, claimed the life of community activist Chris Cooke, who passed away on Monday afternoon.