Part of Brighton seafront is closed this evening as police investigate reports of a man being beaten with a baseball bat after two cars crashed on Marine Parade. 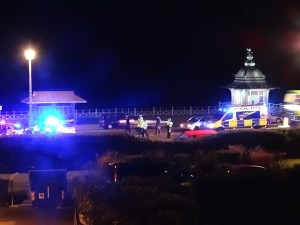 Several police vehicles are on the scene this evening after the incident, which involved two cars. At 9.30pm, Marine Parade was closed in both directions.

A police spokeswoman said: “We have reports that somebody was hit by a car but he’s yet to be found. After the crash, lots of people got out of both cars.

“We’ve had reports of a baseball bats, and of a man being run over, but we don’t know where he is yet.”

Anyone with information about the incident should email 101@sussex.pnn.police.uk or call 101 quoting serial 1299 of 05/03.