BREAKING NEWS
No brand sale for Choccywoccydoodah as it concludes liquidation
Prince Regent to stay closed until end of June
Academy chief’s car blocked in and plastered with flyers during out of hours visit
Parents and children protest about school places outside Hove Town Hall
Council may set up gazebos for covid-safe resident meetings
Grubbs to close three of its four outlets
Concern growing for missing man’s welfare
Work accident triggered 27 years of harassment, court hears
Stanmer House owners outline plans for their ‘jewel in the crown’
Babes in the Wood perjury trial jury retires

Teachers at Brighton and Hove’s sixth forms are striking today over cuts to education and the impacts of the college review. 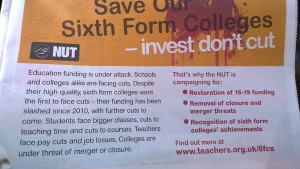 NUT sixth form college members nationally are striking after 86% voted in favour – and a government bid to declare the strike unlawful failed at the High Court yesterday.

Members at both the city’s colleges and school sixth forms have walked out this morning. They have been protesting outside BHASVIC, on the Old Shoreham Road, before travelling to London for a national demonstration. At least one college, BHASVIC, is closed as a result.

Jason, the local NUT branch’s sixth form college opfficer, said: “The Government’s “area based reviews” are increasing the threat to colleges – many will be forced into merger or closure. The Sussex FE and sixth form colleges are being reviewed at the moment, with the stated aim of producing fewer, more resilient colleges.”

“The cuts to sixth form college funding are part of a wider Government attack on public services. Schools are also suffering real terms cuts, as the Government seeks to slash spending on key public services. This is bad economics – when we cut investment in education, we make it harder for young people to develop the skills needed to secure economic growth.

“Public spending cuts never heal – the deskilling of our young people will cause permanent damage to our economic prospects as well as to our social fabric. Sixth form colleges are an essential gateway to university or work for their students – the cuts will make it harder for colleges to help young people achieve their potential.

“The cuts have already hit colleges hard, but the ongoing programme of cuts continues. Some colleges have been able to stave off the worst impact of the cuts so far, but will struggle to do so in future years. We need to act now to defend sixth form colleges and we urge you to support us.”

Funding for 16-19 year olds fell by 14% in real terms under the Coalition Government. The Chancellor announced in November that 16-19 funding will be “protected in cash terms” between 2016 and 2020.

However, the NUT argues that taking inflation into account, this is still likely to mean a further real terms cut of 8% over the next four years.