The cricketer Steve Magoffin has signed a one-year extension to his contract with Sussex.

He will remain at the County Ground – the 1st Central County Ground under a new sponsorship deal – until at least the end of the 2017 season.

The club said: “The tall seamer has also recently had confirmation that his application for British citizenship has been accepted, meaning he will begin the 2016 season as a local player for Sussex, rather than being an overseas player as he has been for the past four campaigns.

“The 36-year-old who hails from Queensland has been one of Sussex’s standout seam bowlers in recent years, taking a mammoth 267 first-class wickets in 63 matches, across his four seasons at Hove. 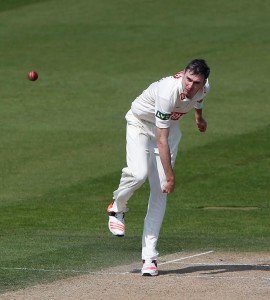 “His best first-class figures came in 2013 when he ripped through the Somerset order at Horsham to claim 8 for 20, and match figures of 12 for 31.

“Magoffin weighed in with 69 four-day wickets in 2015 which took him to second in the leading wicket-taking list in Division One of the Specsavers County Championship.”

Magoffin said: “It’s great for me to commit again to Sussex. I’ve had four really enjoyable years here. I’ve loved every minute of it.

“Hopefully this coming season we can put a good performance together as a group and move back up a division as well as doing well in white-ball cricket.

“I’ve got the British citizenship through now which is great. It took a little bit longer than we hoped but we got there in the end.

“It is good news for Sussex as it allows Ross Taylor to come over here as an overseas and I can continue as a local player.”

Sussex head coach Mark Davis said: “To have Steve extend his contract is a great boost to the club. Steve has been immense since joining the club in 2012, and we look forward to his continued success at Sussex.

“He is not only a high-class performer but a fantastic role model to all at the club, and will play a major role in leading the Sussex attack in 2016.”