The owners of a former school chapel which commemorates more than a hundred old boys who died in the two world wars have been told to restore it to its former glory. 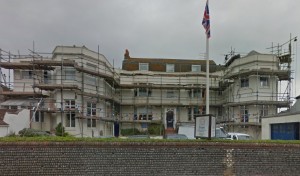 Brighton and Hove City Council has issued a listed building enforcement notice requiring the owners to restore the grade II listed chapel, which is attached to the former St Aubyns School, and put back artefacts which have been removed.

The move follows a campaign by the St Aubyns Field Evergreen (SAFE) group, which is concerned about the deterioration of the listed building.

Brighton Kemptown MP Simon Kirby approached the council on their behalf and said today (Tuesday 22 March) that he welcomed the council’s decision to start enforcement proceedings.

He said: “I contacted the council on behalf of the SAFE (St Aubyns Field Evergreen) group and many local residents who are concerned about how this listed building has been allowed to deteriorate and also about the fact that some of the artefacts have been removed.

“I am pleased that the council are proceeding with formal listed building enforcement proceedings and will be keeping a close eye on the situation.”

The school closed in 2013, and since then a number of planning applications have been submitted in regards to the site and are currently under consideration.

These include demolishing buildings on the site to build a care home, block of flats and converting some buildings into homes.

The developers, the Cothill Educational Trust and Linden Homes, say they intend to retain the chapel, and in 2015 said they were in discussion with local groups over its future use and maintenance.

The chapel was built in 1912 and dedicated the following year. It records the names of 102 old boys who died in the First and Second World Wars.

The school was founded in 1895. It closed in July 2013, less than a year after it merged with the Cothill Educational Trust, and despite a campaign by parents and an offer from Hurstpierpoint College to buy it.