A third attempt to build houses on the site of a car warehouse in Hove have been granted on appeal. 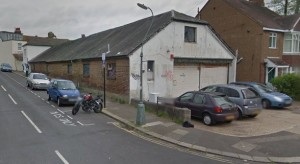 Brighton and Hove City Council’s planning committee went against the recommendations of officers and refused the plans to build four terraces houses and an office on the DH Autos plot in Marmion Road last August.

Councillors were concerned that the terrace would be too high and bulky compared to the surrounding houses.

But this month, planning inspector Andrew Steen overturned their decision, giving the development the green light.

An artist’s impression of the Marmion Road scheme

Mr Steen said that the way the building mixed two and three storey heights meant it stepped up or away from its surroundings and reflect their scale and height.

He added: “I note that the existing building is referred to as historic. However, no evidence has been provided as to the historic importance of the building and, at present, it is a utilitarian structure that does not make a particular contribution to the character and appearance of the locality.

“Whilst some employment floorspace would be lost, additional offices would be provided and this loss has been considered acceptable by the council.”